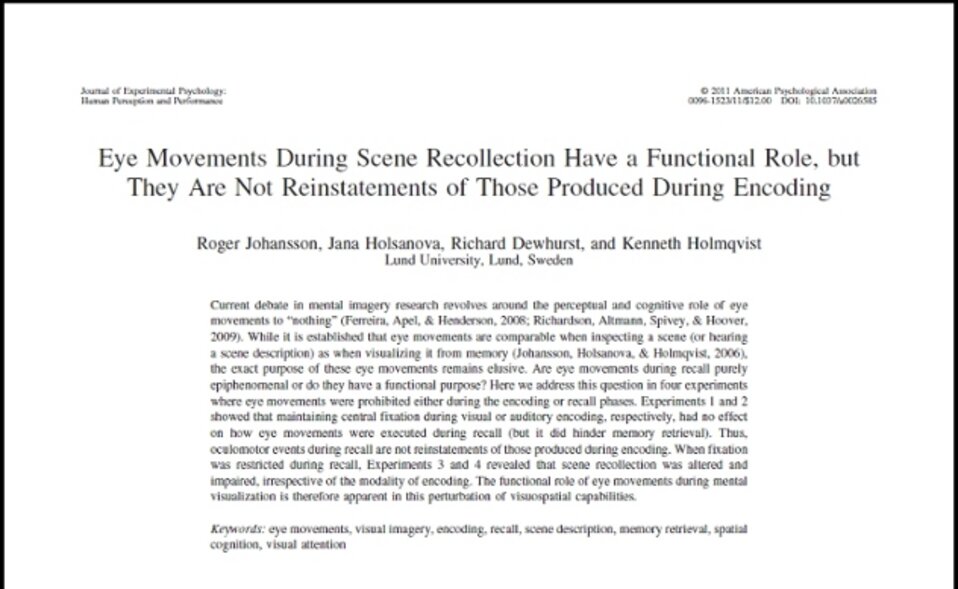 A new article by LUCS mental imagery group has been published as an online first publication in Journal of Experimental Psychology: Human Perception and Performance:

Eye movements during scene recollection have a functional role, but they are not reinstatements of those produced during encoding.

Current debate in mental imagery research revolves around the perceptual and cognitive role of eye movements to “nothing” (Ferreira, Apel, & Henderson, 2008; Richardson, Altmann, Spivey, & Hoover, 2009). While it is established that eye movements are comparable when inspecting a scene (or hearing a scene description) as when visualizing it from memory (Johansson, Holsanova, & Holmqvist, 2006), the exact purpose of these eye movements remains elusive. Are eye movements during recall purely epiphenomenal or do they have a functional purpose? Here we address this question in four experiments where eye movements were prohibited either during the encoding or recall phases. Experiments 1 and 2 showed that maintaining central fixation during visual or auditory encoding, respectively, had no effect on how eye movements were executed during recall (but it did hinder memory retrieval). Thus, oculomotor events during recall are not reinstatements of those produced during encoding. When fixation was restricted during recall, Experiments 3 and 4 revealed that scene recollection was altered and impaired, irrespective of the modality of encoding. The functional role of eye movements during mental visualization is therefore apparent in this perturbation of visuospatial capabilities.