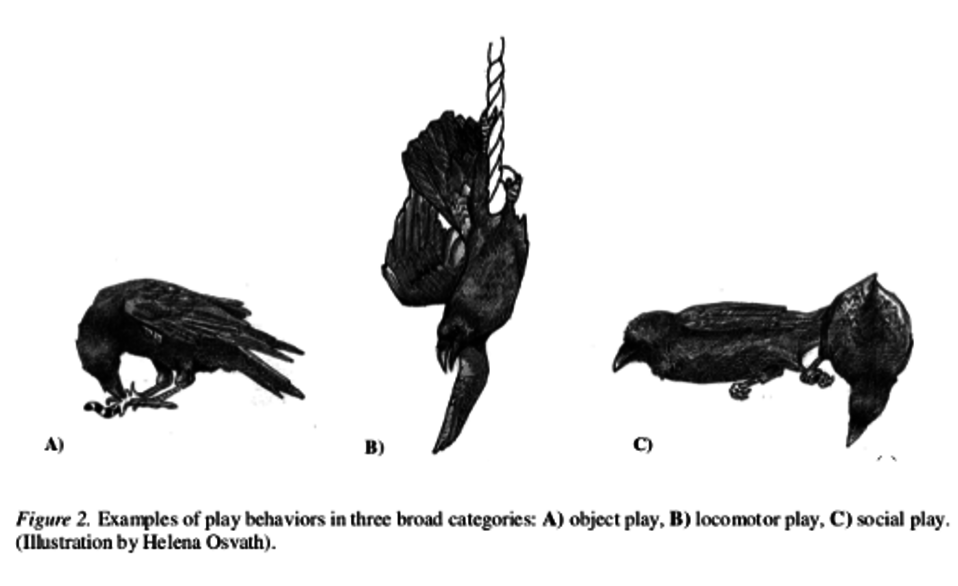 Mathias Osvath and collegues at LUCS Cognitive Zoology Group recently published two articles on Raven cognition in the new open access journal Animal Behavior and Cognition . Below you find the abstract of these papers and link to the full articles.

Mathias Osvath and collegues at LUCS Cognitive Zoology Group recently published two articles on Raven cognition in the new open access journal Animal Behavior and Cognition . Below you find the abstract of these papers and link to the full articles.

An Exploration of Play Behaviors in Raven Nestlings

Mathias Osvath, Helena Osvath and Rasmus Bååth
Abstract - Play is widespread among vertebrates. Some animal groups stand out in their play behaviors in levels of complexity, innovativeness, sociality, and volume. Despite the vast phylogenetic distance between corvids, parrots, great apes, and dolphins, all are usually identified as among the most playful. These groups also have several complex cognitive skills in common. There is growing agreement that play has evolved multiple times under different selective pressures in different lineages. As these groups appear similar in their complex play but are separated by considerable evolutionary distance, the similarity is unlikely to result from homology. Far more probable is that the similarity has arisen from convergent or parallel evolution. It is important to conduct comparative ontogenetic play studies on these groups to learn more about what basic processes underlie complex play and whether such play is, indeed, related to complex cognition. Toward that end, we explored the play behavior of raven nestlings over the last ten days before they fledged. We found high levels of play both in terms of instances initiated and duration. The play behaviors were at level with – or above – maintenance behaviors and flight training. Most of the play was object play, but social object play and apparent play contagion was also recorded. The importance of play in developing young ravens is clear. The reasons might be less clear, however play could underlie both object-related and social development.
Citation – Osvath, M., Osvath, H., & Bååth, R. (2014). An exploration of play behaviors in raven nestlings. Animal Behavior and Cognition, 1(2), 157-165. doi: 10.12966/abc.05.06.2014
Link to full article

Sub-adult Ravens Synchronize their Play: A Case of Emotional Contagion?

Mathias Osvath, and Miriam Sima
Abstract - Emotional contagion – the alignment of emotions between individuals through behavioral synchronization – is proposed as a key, basic component of human social cognition and empathy. In the field of cognitive zoology, contagious behaviors have also received attention. Several such behaviors have been documented in various species. Nevertheless, emotional and behavioral contagion differ. Emotional contagion – a term predominantly used in human psychology – requires that the contagious behavior leads to converging emotional states. In non-linguistic animals, it is difficult to determine whether a behavior “caught” from someone else results in a similar affective state or remains a purely behavioral response. Some studies suggest the latter as a possibility. To disentangle the problem, we explored instances of contagious behaviors within the play domain. In several species, play involves a variety of behaviors falling into different categories: social, object and locomotor play. If a category of play in one individual induces a different category of play in another, this suggests the spread of a generally playful mood rather than a species-specific motor response. Although some studies suggest emotional contagion in mammals, it is not known whether it occurs in birds. We investigated play contagion in a group of ravens, well known for their complex social skills. The results indicate emotional contagion: the birds engaged in all categories of play on a higher level under the condition where contagion was likely to occur.
Citation – Osvath, M., & Sima, M. (2014). Sub-adult ravens synchronize their play: A case of emotional contagion? Animal Behavior and Cognition, 1(2), 197-205. doi: 10.12966/abc.05.09.2014
Link to full article
http://www.lucs.lu.se/wp-content/uploads/2014/05/ravens_play_small.png
http://dx.doi.org/10.12966/abc.05.09.2014